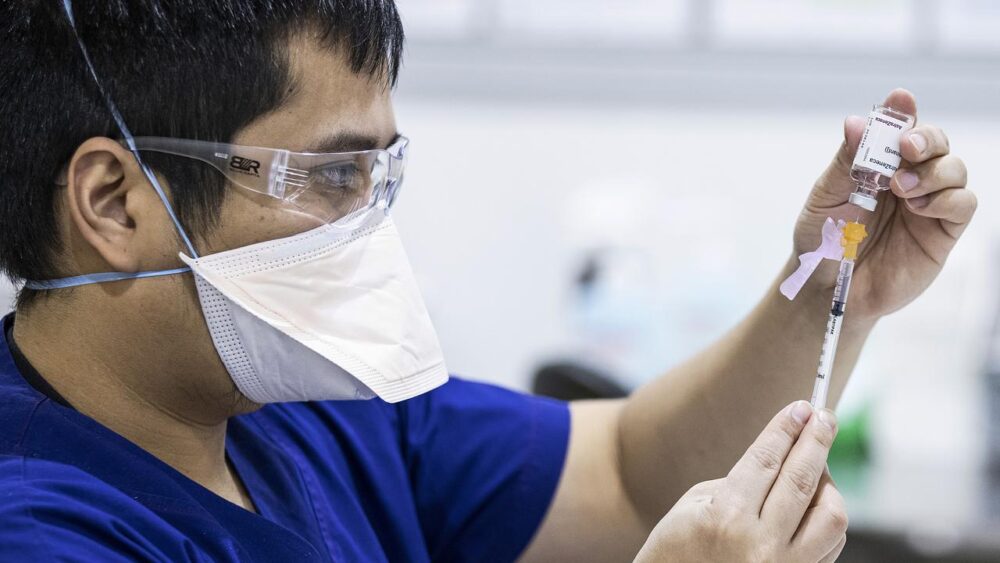 Blood clots have stopped many from getting vaccinated, but a study shows the risk of certain clots is higher in those who get Covid.

A new study has revealed people who get Covid-19 are more likely to get certain types of blood clots than those who are vaccinated.

The research published as a pre-print in The Lancet examined the medical records of about six million people in Spain, including around 400,000 who got vaccinated with AstraZeneca and approximately 900,000 who got at least one dose of Pfizer.

It found there were higher rates of thromboembolism and thrombocytopenia — blood clots that can cause stroke or heart attacks — among those who got sick with the coronavirus than those who had been vaccinated.

In particular, the rate of venous thromboembolism (VTE) increased by eight times after a diagnosis of Covid-19.

In comparison, those who got one dose of Pfizer only saw the risk increase by 1.3 times. The risk was very similar for AstraZeneca, rising by 1.1 times after the first dose.

“For each of the approved vaccines, rates of thrombosis can be expected to be far lower than

rates among those persons with Covid-19, a disease which the vaccines are so effective at

Vaccinating against Covid-19 is the only way for Australians to get their everyday lives back, but as a nation, we’re struggling.

It’s fair to say the vaccine rollout has confused Australians. We’ll cut through the spin and give you clear information so you can make an informed decision.

Unfortunately, the research doesn’t provide much insight into thrombosis with thrombocytopenia syndrome (TTS), which are the blood clots causing deaths among those who get AstraZeneca.

Infectious diseases physician and microbiologist Associate Professor Paul Griffin of the University of Queensland said more research was needed to understand the rate of TTS because the diagnostic criteria for identifying TTS were not necessarily met by the cases in the study.

Prof Griffin said the study was not that relevant to the discussion around blood clot deaths around AstraZeneca but did show that you were more likely to get other types of blood clots, which could also lead to death, if you got Covid-19.

When it comes to the risk of VTE and ATE, both AstraZeneca and Pfizer had fairly similar rates but Prof Griffin noted that the number of people who got AZ in the study were significantly less than those who got Pfizer so there is uncertainty around the significance of this figure.

While the study didn’t shed more light on TTS, Prof Griffin said communication around the risks and benefits of AstraZeneca needed to improve.

“We have way overemphasised the risks, but not the benefits,” he said.

“Covid will keep coming, and the significant but exceedingly rare consequence (of AZ) has led to a lot of concern about vaccination that is a bit misplaced.

“Every vaccination, every medical therapy has potential side effects but we haven’t really communicated that in a balanced way I think.”