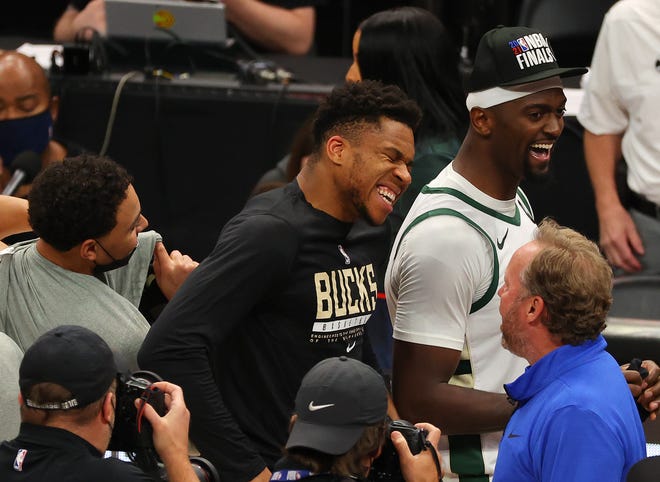 Bucks break through to NBA Finals despite Giannis Antetokounmpo injury

ATLANTA — Giannis Antetokounmpo walked off the court with a gigantic smile.

He had on a 2021 Finals hat with the Milwaukee Bucks logo, just like his teammates. But unlike his teammates, he wasn’t in uniform, wearing a black Bucks T-shirt and black cutoff sweatpants.

It was a strange juxtaposition.

On Saturday, the Bucks had just won the Eastern Conference championship and advanced to the NBA Finals with a 118-107 victory over the Atlanta Hawks in Game 6, and Antetokounmpo didn’t play. He also missed Game 5, another Bucks victory, due to a hyperextended left knee sustained in Game 4.

All this talk the past few seasons about whether he can lead the Bucks to the Finals, and he wasn’t on the court in the game that sent the franchise to the championship series.

“There’s a bittersweetness to him not being able to play these last two games,” Bucks coach Mike Budenholzer said.

Injuries decimated teams and their title dreams this season, from Anthony Davis and the Los Angeles Lakers to Mike Conley and the Utah Jazz to James Harden, Kyrie Irving and the Brooklyn Nets to Jamal Murray and the Denver Nuggets.

Then, the Bucks lose Antetokounmpo in Game 4.

“I don’t think anybody was really feeling all that great about anything,” Bucks backup guard Pat Connaughton said about the Hawks tying the series at 2-2.

But the Bucks found a way to win two games, and though he didn’t play a second or score a point, Antetokounmpo influenced the outcome.

Game 6:Bucks close out Hawks to advance to NBA Finals for the first time since 1974

‘Old soul’:Devin Booker comes of age in helping to lead Suns to the NBA Finals.

Antetokounmpo had a spot right next to the coaches on the bench. During timeouts, he talked to players who had taken seats while waiting for Budenholzer to address the team in the huddle. Budenholzer said the referees almost gave Antetokounmpo a delay of game warning for being too far on the court while the ball was in the play.

Jrue Holiday, who had another standout game in the series with 27 points, nine rebounds, and nine assists, said players didn’t need to make a concerted effort to keep Antetokounmpo engaged.

“Again, he is pretty quiet, but how talkative he’s been has been awesome for us and very, very encouraging.”

Antetokounmpo and Khris Middleton have been in Milwaukee since Antetokounmpo was drafted in 2013 – long before Antetokounmpo turned into a two-time MVP and Middleton developed into an All-Star who can drop 23 points in a quarter like he did in Game 6.

They embraced in the postgame celebration before they were awarded the conference championship trophy.

What’s next for Antetokounmpo? Winning two games without your best player is one thing. Winning four games in the Finals without him is a different matter.

The Bucks said there was no structural damage to his knee, but they also didn’t say if it were a strain, sprain or bruise.

“Knowing Giannis,” Holiday said, “he’ll probably be back at some point in the series.”