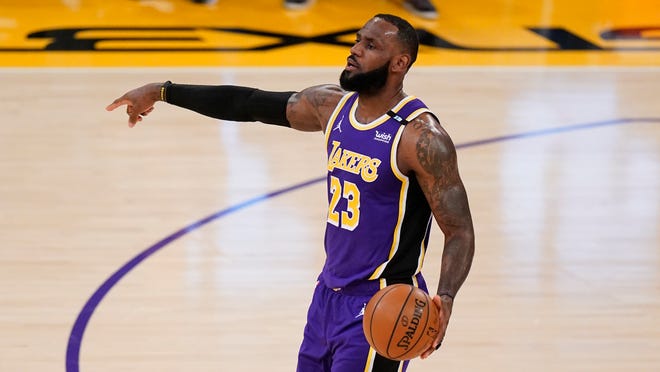 With just three days left in the regular season, the intrigue surrounding the play-in format has drawn more attention than the race for the No. 1 seed, buoyed by the prospect of the defending champion Los Angeles Lakers needed to win a play-in game to make the playoffs.

In short, the seventh- and eighth-place teams in both conferences aren’t guaranteed a playoff spot. The league has given the ninth- and 10th-place teams a shot at reaching the playoffs.

Here’s how it works and who might end up in the play-in game format.

After the regular season concludes, the seventh- and eighth-place teams play each other, and the winner earns the No. 7 seed. The loser of that game plays the winner of the 9-10 tournament. The winner of that game becomes the No. 8 seed. To give the teams that had a better record during the regular season an advantage, teams 7-8 need to win just one play-in game to advance, and teams 9-10 need to win two games.

The picture is more transparent in the East than in the West, though tiebreakers convolute the scenarios.

Boston, Charlotte, Indiana, and Washington are in spots 7-10 right now with Chicago lurking in 11th place. The top six seeds in the East are set, so none of these teams can finish above No. 7.

The Celtics secured seventh place in the East because Charlotte lost to the Los Angeles Clippers and the Pacers lost to Milwaukee on Thursday. Even if the Celtics lose out and the Hornets and Pacers win out and all three teams finish with 35-37 records, the Celtics own the head-to-head tiebreaker against both teams.

Though Charlotte and Indiana have identical records and each have two games remaining, the Hornets are in eighth place because they own the head-to-head tiebreaker. Charlotte does not have it easy the rest of the way, playing teams who are jostling for playoff or play-in positions. Indiana doesn’t have a cakewalk either. But at the very least, the Hornets and Pacers have locked up a spot in the play-in game.

In the West, the seventh-place Lakers, who are still waiting for LeBron James to return, still have a chance to move into the sixth or fifth spot, but they need help. At 40-30, they are a game behind 41-29 Dallas and a ½ game behind 41-30 Portland.

Both the Blazers and Mavericks own the tiebreaker against the Lakers, so for the Lakers to avoid the play-in game, they would need to win their two remaining games and either Dallas or Portland would have to lose their remaining games. So, Portland and Dallas could still end up in the play-in game, and the Blazers have the most difficult schedule of the three teams. Portland lost to Phoenix on Thursday. But if it’s the Lakers in the seventh spot, they could face eighth-place Golden State in a tantalizing play-in game.

The Warriors don’t have eighth place in their possession just yet. Golden State is tied with Memphis at 37-33. That position could come down to the final game of the season when the Warriors and Grizzlies play on Sunday with the winner earning the tiebreaker.

San Antonio will finish in 10th place because Sacramento lost to Memphis on Thursday, eliminating the Kings from a play-in game possibility. The Spurs can’t catch Golden State or Memphis for eigth or ninth place.

Share
What to expect from Google’s all-virtual I/O – TechCrunch Previous post
Susan Bryant on the importance of speaking about mental health, suicide after husband’s death Next post