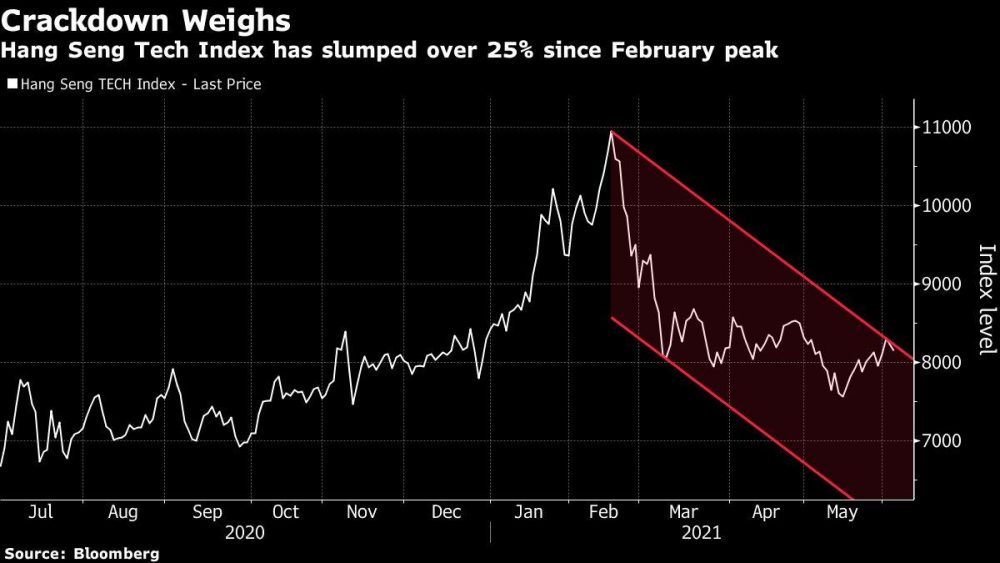 (Bloomberg) — Beijing’s antitrust crackdown on homegrown tech giants may be coming to an end, leaving stock valuations of some of the major firms at attractive levels.

That’s the view of Hyomi Jie at Fidelity International Ltd., whose China consumer equity funds oversee $7.3 billion in assets. One has beaten 96% of peers in the past year. Hong Kong-based Jie sold some of her holdings in Alibaba Group Holding Ltd. and Tencent Holdings Ltd. earlier in the year, though they remain among her most significant positions.

While probes of billionaire Jack Ma’s Alibaba and Ant Group Co. took three to four months, the second batch of investigations into firms such as Tencent and Meituan may proceed more quickly, indicating that the regulatory cycle could be wrapping up as key players in the industry have agreed on what needs to be done, according to Jie.

According to Bloomberg-compiled data, she isn’t alone in noting the appeal of valuations of shares such as Alibaba and Tencent now, with buy recommendations from analysts dominating for those stocks.

China’s rapid-fire moves to curb anti-competitive practices by more than 30 technology firms have rattled investors, leaving them uncertain about the prospects of once-adored industry favorites. Shares of internet titans such as Alibaba and Tencent have fallen about 20% from their recent peaks, driven also by a global tech selloff.

“Couple months back, valuation was a reason for me wanting to trim these stocks even though I really like their fundamentals,” she said. “Now the valuations are working in favor of them because they are much less liked by other investors.”

Alibaba is trading at around 20 times its 12-month earnings estimates, compared with its five-year average of 25 times. Tencent’s multiple has fallen back to its standard since 2016 of approximately 31 times. That compares with 35 times for the Hang Seng Tech Index.

Since mid-February, Tencent, Alibaba, and Meituan have lost more than $400 billion combined in market value.

Beyond the tech industry, the money manager has moved profits into cyclical stocks that are likely to benefit as the global economy recovers from the pandemic.

In particular, Jie has favored Macau casino operator Galaxy Entertainment Group Lt. She expects the former Portuguese territory to be the first port of call for Chinese travelers after the pandemic.

“When Chinese people start to want to travel again outside of China, Macau is the safest place for them to go,” she said. Structurally, “Macau is an attractive destination for many mass and premium-mass customers,” and there is very tight control on supply of tourism resources there, Jie said.

While Moutai, China’s biggest domestically-listed company, has often been criticized for being too expensive — trading at 48 times forward 12-month earnings — she believes that it’s worth it. Taking advantage of the selloff in consumer staples, Jie added to her position in it earlier this year.

“Moutai has never been a cheap stock,” she said. “If there is a higher quality business than Moutai that is trading cheap then I’ll be happy to move on, but if that’s not, then I’d like to stay with the stock and grow into it.”

(Updates tech stocks’ valuation in the eighth paragraph and adds Jie’s view on Moutai in the last three paragraphs.)