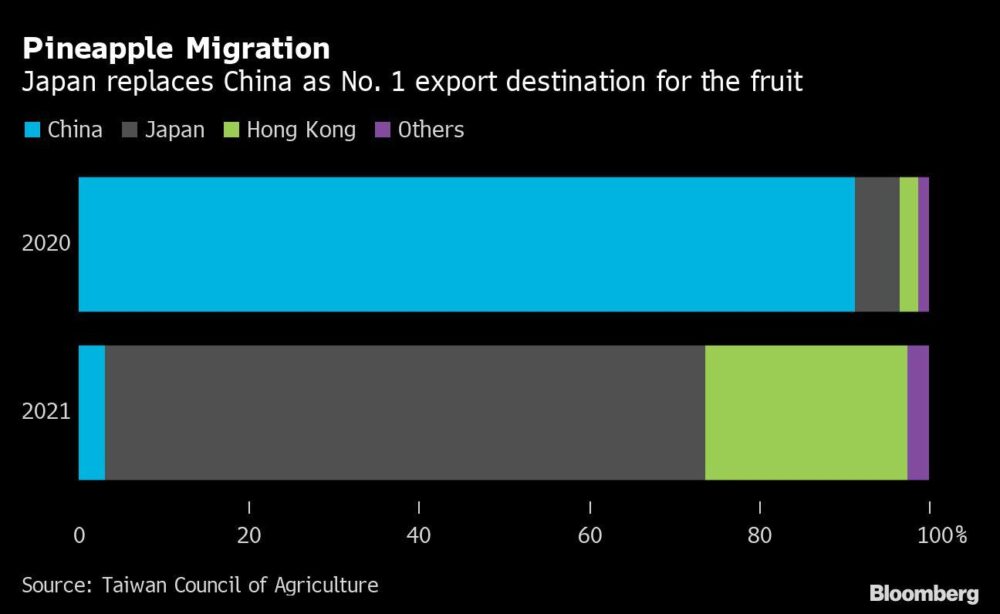 (Bloomberg) — China’s surprise ban on pineapple imports from Taiwan five months ago was widely viewed as an attempt to undermine President Tsai Ing-wen’s standing with a political constituency. Trade data show the move has produced anything but the desired effect.

First-half numbers collected by Taiwan’s Council of Agriculture show growers of the fruit on the island have fared better since China blocked imports starting March 1, as sympathetic Japanese shoppers stepped in to provide support. Shipments to Japan surged more than eightfold to 16,556 tons in the four months through June from a year ago. A domestic campaign to drum up demand also helped.

The helping hand from Japanese importers has come as a pleasant surprise for Taiwan’s rattled farmers. They were bracing for a plunge in prices following the move by China, which termed it a usual precaution to protect biosecurity. The spiky fruit is among a long list of products from Australian wine to coal and lobster China has targeted for sanctions to help gain leverage in trade disputes.

“The bleeding was stopped before it even began,” said Chen Li, an official at the Council of Agriculture in Taipei.

Japan has now replaced China as the significant overseas destination for Taiwan’s pineapples. While it’s unclear how long the ban will last — the shift may well reverse once the restrictions are lifted — the humble tropical fruit has become an unlikely symbol of defiance in the region’s geopolitical intrigues. Amid all the saber-rattling by Beijing, Japan and the island democracy have expressed a broad desire to forge closer ties. Leaders in Tokyo see their own security directly linked to Taiwan, which China asserts is its territory.

Pineapples are an essential source of income for farmers in central and southern Taiwan. Around 11% of the tropical fruit harvested in Taiwan are sold overseas. Until the ban, they were almost entirely shipped to China.

Besides the help from Japan, an increase in domestic demand fueled by a “save the farmers” campaign on social media rallied local shoppers in support of growers. Even President Tsai pitched in a day after China’s ban took effect.

Farmers also received passionate backing from local businesses. Restaurants across the island rushed in to add a pineapple-infused sweet twist to all sorts of dishes ranging from shrimp balls, fried rice and even the classic beef noodle soup. Taiwan Railways Administration introduced special edition lunch boxes with pineapples as one of the side dishes.

As a result, domestic prices of the fruit jumped 28% to an average NT$22.1 (80 cents) per kilogram in the March-June period, a three-year high. The total value of the pineapples sold locally rose 17%, according to data provided by the farm council’s Chen.

One key question is whether the uptick in overseas demand is sustainable. Exporters cite concerns over Japan’s stringent quality requirements and consumer preferences for smaller, less-sweet varieties than the pineapples typically grown in Taiwan.

But the Chinese ban leaves Taiwan with little choice but to review its export markets for the fruit, according to Young Fu-fan, a grower in the southern county of Tainan.