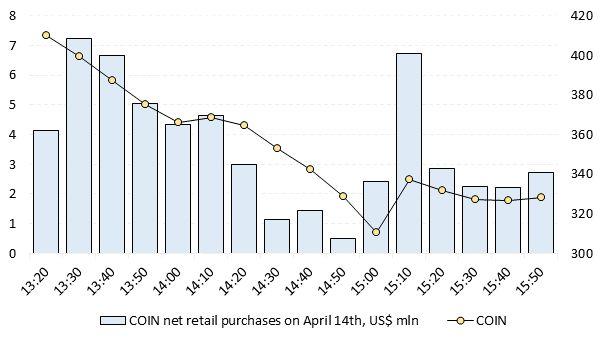 Coinbase’s Retail Buyers Stung After Plowing in at Debut

(Bloomberg) — Coinbase Global Inc. got a jump start on its first day of trading from the retail crowd. And the early enthusiasts likely walked away with a few bruises.

Day traders purchased a net $57 million of the cryptocurrency exchange’s shares during its debut Wednesday on the Nasdaq Stock Market, according to data from VandaTrack. That total accounted for 7% of the $822 million individual investors spent on all U.S. stocks and exchange-traded funds on the day and made Coinbase the fifth-most popular debut with the demographic since 2017.

They didn’t wait long to jump in.

Nearly a third of all retail dollars spent on Coinbase Wednesday poured in during the first 20 minutes of trading as the shares soared by 13% from the opening price of $381 to an intraday high of $429.54. Retail buying tapered off as the initial euphoria waned, and the shares pared their gains to finish the day below the opening trade price.

Coinbase gained as much as 6.4% in early trading Thursday on news of a $246 million investment from Cathie Wood’s Ark Investment Management and positive analyst coverage. However, the shares remained below their opening price.

Tayo Kuku, a 27-year old photographer, based in Washington, D.C., is among the cohort of investors who bought in. But within 10 minutes of purchasing the stock at $394 and a few conversations with his friends who are also buyers, it “made me realize that I probably didn’t make the best decision jumping in that quickly,” he said.

“I obviously knew the risk of jumping in on a company as soon as it went public, but it just seemed like an obvious investment considering cryptocurrency has been the ‘next big thing’ for young investors like me.”

Fortunately for Kuku, he managed to sell at a profit of $415. Though he left unscathed, he still plans to “keep an eye out and may possibly dip my feet back in in the next few weeks.”

The debut of the first cryptocurrency exchange to list on a U.S. public market was widely hailed as ushering in a new era for the oft-mocked asset class. That drew the attention of retail traders who piled in at a level not seen since the debut of Rocket Cos., the parent of the mortgage giant founded by billionaire Dan Gilbert, making it the fifth most- popular new listing among the group since 2017.

“It is pretty surprising to see such strong buying,” said Viraj Patel, global macro strategist at Vanda Research. “There was obviously a lot of hype around this, and certainly Coinbase will be almost the best proxy for trading the crypto theme in the coming years.”

On Fidelity’s platform, Coinbase was the most traded stock on the day. According to data from the brokerage, more than 148,000 shares changed hands there, nearly nine times more than runner-up Tesla Inc.

“What is fascinating about Coinbase is this is the first way in which individuals can take part in this new market for cryptocurrencies without being subject themselves to the volatility those currencies have,” Michael Wolf, the chief executive officer and co-founder of Activate, a technology consulting firm, said on Bloomberg Television. “We are going to see that Coinbase is going to be held widely — at this market cap, it’s going to be held by index funds. It will allow small investors as well as individuals to take part in this entire move toward cryptocurrencies.”

But for all the fanfare, Coinbase wasn’t the top pick of at-home traders on Wednesday. That honor went to the ProShares UltraPro QQQ exchange-traded fund (ticker TQQQ), three times levered tracker of the Nasdaq 100 Index, which saw $72 million of net retail buying on the day despite plunging by 3.5%.