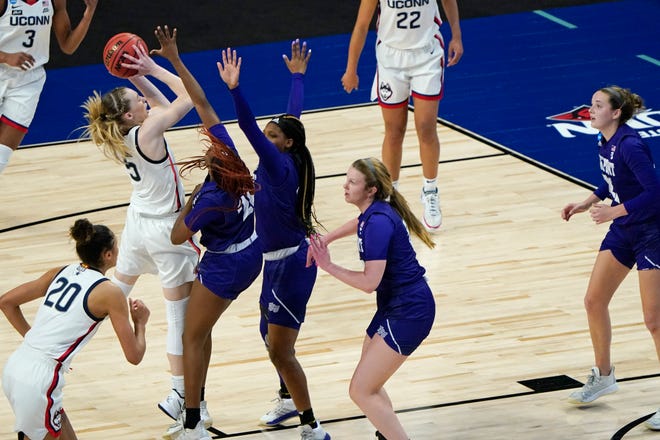 SAN ANTONIO ⁠— It has taken Paige Bueckers less than a season compared to some of the greatest players in Connecticut women’s basketball history.

After scoring 24 points Sunday night during a victory over High Point ⁠— a team record for a player competing in her first NCAA Tournament game ⁠— associate head coach Chris Dailey compared her to former Husky All-American guard Sue Bird. The bird would be a slam-dunk pick to be on UConn’s Mount Rushmore, a list that would include Maya Moore, Breanna Stewart, and Diana Taurasi.

Bueckers (pronounced Beckers) is so talented in every aspect of the game, she often appears to be playing effortlessly. Hitting 9 of her 13 shots from the field, primarily mid-range jumpers, there is little wonder she entered the season as the most heralded freshman in the game.

“Her pull-up reminds me of Sue Bird,” said Dailey, filling in while head coach Geno Auriemma sits out for testing positive last week for COVID-19. “Sue was automatic. She never missed. It’s the same for Paige. When she takes it, I feel pretty confident.”

BRACKETS: How is the field taking shape for men’s and women’s tournaments

Some questioned whether UConn (25-1) might stumble this season because its 12-player roster includes seven freshmen. The starting backcourt consists of Bueckers and fellow freshman Nika Muhl while freshman Aaliyah Edwards averages 21 minutes a game.

Yet, the Huskies cruised into the Sweet 16 with ease.

“We know that our team needs us,” Bueckers said, referring to the freshmen. “There’s seven of us, so we know we have to step up for the team to win. That’s been an ongoing story for us all year.”

UConn has enough good pieces to make a run for its 12th NCAA championship, but all eyes have been on Bueckers. For a good reason. A 5-foot-11 point guard, she leads the team in three main categories: 19.9 points per game, 5.7 assists, and 2.3 steals.

BUECKERS: One of 10 newcomers to watch in women’s NCAA tournament

Bueckers’ season has already been rewarded. She has been named Big East player and freshman of the year and was named a first-team All-American by the Associated Press last week.

She is on the shortlist for AP Player of the Year.

Will she win it?

After his team won the Big East Tournament two weeks ago, Auriemma had an interesting comment when asked what qualities Bueckers has to make her worthy of individual honors.

The seeds of greatness were planted when Bueckers became a star in her hometown of Minnetonka, Minn. (population: 53,953), eight miles west of Minneapolis. She played on the high school’s junior varsity team when she was still in seventh grade. She grew four inches in the summer before her eighth-grade year and earned a spot on the Hopkins High varsity team, averaging 9 points, 3.5 rebounds, and 2.1 assists. She was named to the Class 4A All-Tournament team after her team finished second in the state.

At UConn, Bueckers played some of her best basketball against the team’s most formidable opponents. In games against teams such as No. 1 seed South Carolina, No. 3 seed Tennessee and No. 4 seed Arkansas, she averaged 22.3 points on 49% shooting (33.3 percent on 3s), 4.7 rebounds, 4.7 assists, 2.3 turnovers, and 3 steals.

“Paige absolutely has another gear (when playing good teams),” Dailey said. “The more physical the game ⁠—and if she thinks she’s being fouled ⁠— the gear comes up quicker. When she reaches that gear, she’s hard to stop.”

Auriemma has often said that Bueckers is too unselfish, passing up open shots to get her teammates more involved. In one of her many outstanding plays on Sunday, Bueckers was dribbling the ball near midcourt when she fired a zip pass to junior guard Christyn Williams. The pass split between two High Point defenders, and Williams turned it into an easy layup.

Bueckers raised her arms in triumph after Williams made the bucket. In turn, Williams pointed to her freshman teammate as they got back on defense.

“I get nervous before every game because this means so much to me,” Bueckers said. “I want to play well for my team. Obviously, it’s won or goes home. The attitude we’ve had all year is that we’re trying to win.”

UConn has carried that attitude for a generation.