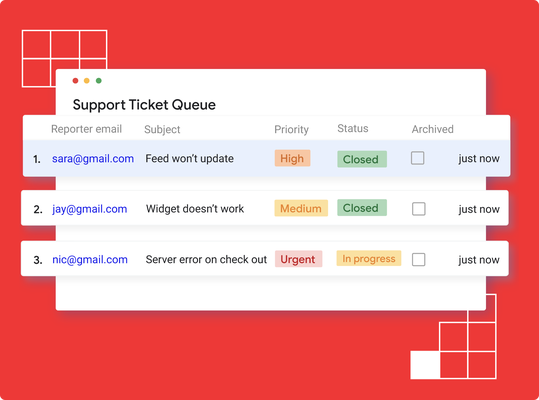 The Tables project was started by a long-time Google employee, now Tables’ GM, Tim Gleason, who spent 10 years at the company and many more in the tech industry. He said he was inspired to work on Tables because he always had a complex time-tracking project, as teams shared notes and tasks across different documents, which quickly got out of date.

Instead of tracking those sorts of notes and tasks associated with a project across various documents that have to be manually updated by team members, Tables uses bots to help take on some of the administrative duties involved in guiding team members through a project — like scheduling recurring email reminders when tasks are overdue, messaging a chat room when new forms are received, moving charges to other people’s work queues, or updating jobs when schedules are changed.

The team saw Tables as a potential solution for various use cases, including, of course, project management, IT operations, customer service tracking, CRM, recruiting, product development, and more.

According to VP/GM and Head of Platform for Google Cloud Amit Zavery, early customer feedback was positive. The team saw customers adopting the service for multiple projects — another strong signal for its potential growth. He declined to say how many customers were already using the service, however.

“If you saw what happened with COVID, I think work-tracking became a pretty big area of interest for many customers who we’re speaking to,” he says, explaining that everyone was trying to quickly digitize.

Famous use cases included inventory management, healthcare supply tracking, and use in mortgage-lending workflows. However, the team found Tables were adopted across a variety of industries beyond these, as hoped. On average, they found that customers would use Tables in a department with around 30 to 40 people.

Most customers were abandoning more manual processes to use Tables instead, not coming from a rival service.

“Things were very fragmented in different documents or with different people, so using technologies like this really seems to have resonated very well,” Zavery says. “Now you had one central place for structured information you can access and do things on top of it versus trying to have 15 different sheets and figuring out how they are related because there’s no structure behind each of them.”

Another factor that prompted Tables’ adoption was how quickly people could be productive, thanks to its ability to integrate with existing data warehouses and other services. Currently, Tables supports Office 365, Microsoft Access, Google Sheets, Slack, Salesforce, Box, and Dropbox.

Tables were one of only a few Area 120 projects to launch with a paid business model, ticket seller Fundo, conversational ads platform AdLingo and Google’s recently launched Orion WiFi. An individual could use Tables for free during its beta, with support for up to 100 tables and 1,000 rows. The paid plan was supposed to cost $10 per user per month, supporting up to 1,000 tables and 10,000 rows. This plan also included larger attachments, more actions, advanced history, sharing, forms, automation, and views.

However, Google never began charging for its paid tier during the beta, it says.

As Tables graduates into Google Cloud’s lineup, it will be integrated with Google’s no-code app building platform, AppSheet, a free tier that allows the freemium model to continue. Users who want additional features will be able to upgrade to a premium plan. It will also be offered as a standalone product for those who want that experience.

Google will leverage Workspace to get Tables in front of more users, as well.

“it’s going to be delivered through Workspace integration because that’s a huge community of users who expect some similar kind of functionality,” Zavery says. “That will be a big differentiator; when you talk about the breadth of things we can do — because of having that community of users on Sheets, the things they do with Drive, and the data they collect — we can automatically add this and augment their experience.”

The project taps into the growing interest in no-code, spreadsheet-powered database platforms — like AirTable, for example, which had closed on $185 million in Series D funding in the days before Tables’ release, valuing its business at $2.585 billion, post-money.

As Tables transitions to Google Cloud, the Tables beta version will remain free until a fully supported Cloud product becomes available next year. At that point, users will migrate to the new service.

Over time, Tables plans to add more functionality as it ties in with AppSheet, to make using the service more seamless — so people don’t have to hop around from one product to another to accomplish tasks. It will also provide better ease of use, mobile support, and connectivity with more backend systems.

Official pricing hasn’t been finalized but shouldn’t be very different from the beta version.