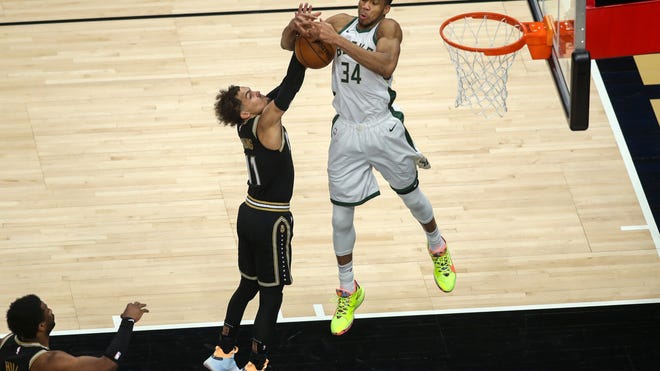 Hawks, Trae Young shimmy their way past Bucks in Game 1 of East finals

MILWAUKEE — Steph Curry has mastered the shimmy after a made shot.

Atlanta’s Trae Young took the shimmy to the next level by doing it before a made 3-pointer.

Nearing the end of the third quarter Wednesday, Young crossed up Jrue Holiday and found himself so wide open for a 3-pointer that he paused, surveyed the scene, did a little shoulder shimmy, and left it fly. Count it.

It was part of his special 48-point, 11-assist performance in the Hawks’ 116-113 victory over the Milwaukee Bucks in Game 1 of the Eastern Conference finals.

Young is the second-youngest player in NBA history to have at least 45 points and 10 assists in a playoff game behind Dallas’ Luka Doncic — yet another connection between the best players of an excellent 2018 draft class. They were essentially traded for each other.

In his playoff debut, Young added more memorable moments to an impressive collection of them. Young has averaged at least 25 points and 10 assists in five playoff games and averaged 30.5 points and 10.5 assists in 13 games.

“He just has the skill that these top players have in this league,” Hawks coach Nate McMillan said. “You have to put him with the top guys in the league. He really doesn’t have a weakness on the offensive end of the floor. He can shoot from deep. He stretches the floor. He has a mid-range game. He will pass the ball, find his teammates. He shoots free throws well.”

His ability to break down defenses with dribbling, passing and shooting has become a problem for playoff opponents. New York had the No. 4 defense, Philadelphia No. 2, and Milwaukee No. 9.

“He’s seen all the defenses that teams have played against him,” McMillan said. “We’ve talked about this throughout the season. He’s seen a box-and-one. He’s seen more prominent defenders. He’s seen physical defenders. He has seen teams trap and try to get the ball out of his hands.

“This is part of the growth that he has to go through, and the good players, they go through this, and they learn from it. But they don’t allow the different coverages to take them out of their game. They still find ways to be productive, and Trae has been able to do that.”

PREDICTIONS: Our team makes its picks for the Bucks vs. Hawks series

NEXT TEST: Can Giannis deliver Milwaukee an NBA championship?

Young is shooting just 42.2% from the field and 32.8% on 3-pointers, but his playmaking and confidence compensate for that.

There is context to the shimmy 3. Young didn’t have a great 3-point shooting game. He was just 3-for-8 before that attempt and 4-for-13 for the game. But he didn’t lack confidence, and it delivered a message to the Bucks: the Hawks aren’t going to give this series to Milwaukee, and they’re here to take it.

“I had a lot of time and was kind of tired a little bit,” he said, “so I got a little second to get a deep breath and knock it down.”

But it’s clear Young thrives in this atmosphere. He jaws at the crowd, and at one point in the second half, he said something to the Bucks bench that caught the attention of referee Zach Zarba, who didn’t like what he heard and went straight to the Hawks coaching staff at the timeout. Zarba and Young had a brief and respectful conversation before play resumed.

MOCK DRAFT 2.0:Projected first round after lottery determines the order

“When I was going on the road in middle school, I always loved playing on the road,” Young said after Atlanta’s sixth road win and third Game 1 road victory of the playoffs. “I loved playing against the opposing crowd, an opposing team. It feels like you’re really just with your team, and it’s just them in the building. I think that really brings our group together. We’re a close group. When you’re on the road, it really forces you to come closer with your teammates, to find a way to win.”

When Young’s shot wasn’t falling in the fourth quarter (just 1-for-7), he made winning plays: three assists and 9-of-10 shooting from the foul line. His pass to John Collins for a corner 3, cutting Milwaukee’s lead to 111-110 with 1:39 left, changed the game’s trajectory.

McMillan said Young is built for this moment. Then-Dallas coach Rick Carlisle said the same thing about Doncic, who hasn’t made it out of the first round. But what they mean is that they aren’t afraid of the moment.

“He’s a young player, so there’s a lot more room for growth for Trae,” McMillan said. “This is his first time in the playoffs, and as I was basically working with him during the season, I really felt he was built for this time of the season. He’s a fearless player. He’s a confident player. He’s a kid that every second that he’s on the floor, he’s giving it to you. He’s giving everything that he has.

“I really feel that his game, his style of play, is really built for this time of the season.”

McMillan, the former point guard, has spent a lot of time with Young this season. “I’ve been in his position before,” McMillan said. “I certainly don’t have the talent that he has (long pause for effect) on the offensive end of the floor.”

“When you have a coach that believes in you, and then you’ve got great teammates around you that make plays and also believe in you, it makes my job a lot easier,” Young said. “I just go out there, I have fun, enjoy the game, and just try and leave it at that. Then, whatever happens, happens. It’s been fun.”