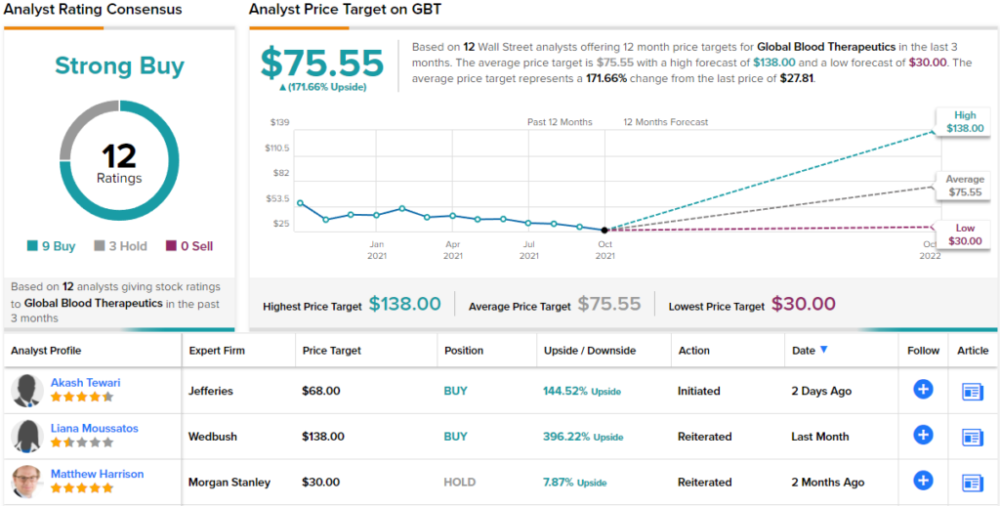 Investing in These 2 Stocks Could Double Your Money, Say Analysts

Investors are constantly searching for the next big winner. We mean the stocks that are on track to see explosive growth, handsomely rewarding the investors that managed to get on board at the right time. But how are investors supposed to know when it’s time to snap up the right stock?

When first approaching this task, investors will often turn to names during or on the heels of an impressive rally. However, Wall Street analysts note that this isn’t always the best move. Instead, the Street’s seasoned pros tell investors that compelling investments can be found among names that have stumbled lately. Rockiness in share prices can present a unique opportunity to get in on the action before the stock increases.

Considering this, we used TipRanks’ database to pinpoint two tickers with strong growth narratives that remain intact despite recent weaknesses. These stocks not only have earned overwhelmingly bullish support from the Wall Street analysts who cover them but sky-high upside based on the pros’ estimates. Let’s take a closer look.

We’ll start with Global Blood Therapeutics, a clinical-stage biopharmaceutical company focusing on treating sickle-cell disease (SCD), a severe hereditary blood condition. Global has one drug, voxeletor (trade name Oxbryta), approved and on the market as a treatment for adults with SCD and an active development pipeline. The company’s research pipeline includes clinical trials of voxeletor for additional indications in the treatment of SCD and several newer drug candidates in earlier stages of development.

Voxeletor sales brought in $47.6 million for GBT in the second quarter of this year, a yoy increase of 51%. The drug is approved for use in patients over age 12. Still, in early September, GBT announced that the FDA has ‘accepted for review’ a supplemental New Drug Application (sNDA) for voxeletor’s potential use in the pediatric market in children ages 4 to 11. GBT is also pursuing marketing authorization for voxeletor in the European Union.

In July of this year, GBT kicked off two Phase 3 pivotal trials of inclacumab, the leading drug candidate in the research pipeline. These studies will evaluate inclacumab in the treatment of vaso-occlusive crises (VOC) and VOC-related hospital readmissions. Among the company’s preclinical drug candidates for the treatment of SCD, GBT601 is the most advanced, and the company is initiating a Phase 1 proof-of-concept trial, with data expected by the end of the year.

While it’s no question that shares have taken a beating over the last 12 months (down 55%), Jefferies analyst Akash Tawari believes the pullback represents an attractive entry point.

“In our view, GBT is two pitches in one. 1). Oxbryta’s implied mkt share of SCD is only 5-6% at the current valuation. We think this is prohibitively low given its efficacy + tolerability that matches up favorably vs. FMTX & AGIO’s SCD drugs. More importantly, Oxbryta should return to growth next yr as COVID gets under control... We estimate $1.1B peak sales of Oxbryta w/ 22% market share in our base case. 2) We’re bullish on GBT601, a next-gen Oxbryta that has the best-in-class preclinical data and the potential to rival gene therapies if treated early in SCD pts. We currently model $0.9B risk adj. peak sales. Its key dataset comes out in December at ASH where GBT will show 6+ SCD pt data,” Tawari opined.

The analyst summed up, “Valuation and timing make GBT a top pick for investors who are willing to enter the name ahead of ASH.”

To this end, Tawari rates GBT shares a Buy along with a $68 price target. This target conveys his confidence in GBT’s ability to climb ~145% from current levels. (To watch Tawari’s track record, click here)

It appears the rest of the Street sees plenty of upsides, too. Based on 9 Buy ratings and 3 Holds, the analyst community rates GBT a Strong Buy. The average price target hits $75.55 and implies a potential upside of ~172% over the coming months. (See GBT stock analysis on TipRanks)

Next up, Brooklyn ImmunoTherapeutics is a purely clinical-stage biopharma company focused on the treatment of cancer. The company is working on cytokine-based therapies and is testing them in both mono treatment and in combinations with existing ant-cancer drug courses.

BTX’s work with cytokines has led it to IL-2, or interleukin-2, a cytokine that helps boost lymphocytes in the immune system. The company is putting its lead candidate, IRX-2, through clinical trials. Data from the Phase 2a study in patients with squamous cell carcinoma of the head and neck (SCCHN) showed the drug was efficacious in stimulating lymphocyte infiltration of the tumors. Lymphocyte infiltrations are associated with patients’ long-term survival of cancer.

The Phase 2a clinical trial has given BTX a runway to initiate a Phase 2b trial, the INSPIRE study, of IRX-2 in SCCHN patients. Enrollment for the study has been completed, and the company expects to release early results in 1H22. The study has 105 patients with various forms of SCCHN.

BTX’s research pipeline is a crucial feature, but the company has also been making waves for business moves. In July, BTX completed its acquisition of the private biopharma firm Novellus. The transaction enhanced BTX’s research program by merging Novellus’ work with cellular, gene editing, and cytokine programs.

The acquisition of Novellus brings another advantage to BTX – it relieves the company of responsibility for royalty payments. In April, BTX paid Novellus $1 million for the rights to the private firm’s mRNA/GE research platform; this acquisition, arguably, completes BTX’s buy of that technology.

This company has been keeping busy this year. In addition to ongoing research, and its M&A activity, BTX went public in March of this year. The move was accomplished by a SPAC transaction, a reverse merger with NTN Buzztime, Inc. The union was an all-stock deal that saw the BTX ticker commence its trading on March 26.

BTX shares peaked last May, but since then, the stock has declined to say the least. Claims are down 89% since their peak.

“IRX-2 is the near-term driver with the P2b ongoing and data in 1H22. The mRNA/GE platform is moving through preclinical steps and updates, particularly with investors focused on this therapeutic category, which could support both near- and long-term value for BTX investors. The story has just begun for BTX, with the company going public via reverse merger in March 2021, installing an experienced management team in April 2021, and then acquiring Novellus. As such, the pieces should be in place for success; at a ~$450M market cap, BTX shares are undervalued in our view,” McCarthy explained.

McCarthy rates BTX shares a Buy, and his $20 price target suggests the stock has room to grow 131% from the current level of $8.67. (To watch McCarthy’s track record, click here)

Some stocks fly under the radar, and BTX is one of those. McCarthy’s is the only recent analyst review of this company, and it is decidedly positive. (See BTX stock analysis on TipRanks)

Disclaimer: The opinions expressed in this article are solely those of the featured analysts. The content is intended to be used for informational purposes only. It is essential to do your own analysis before making any investment.