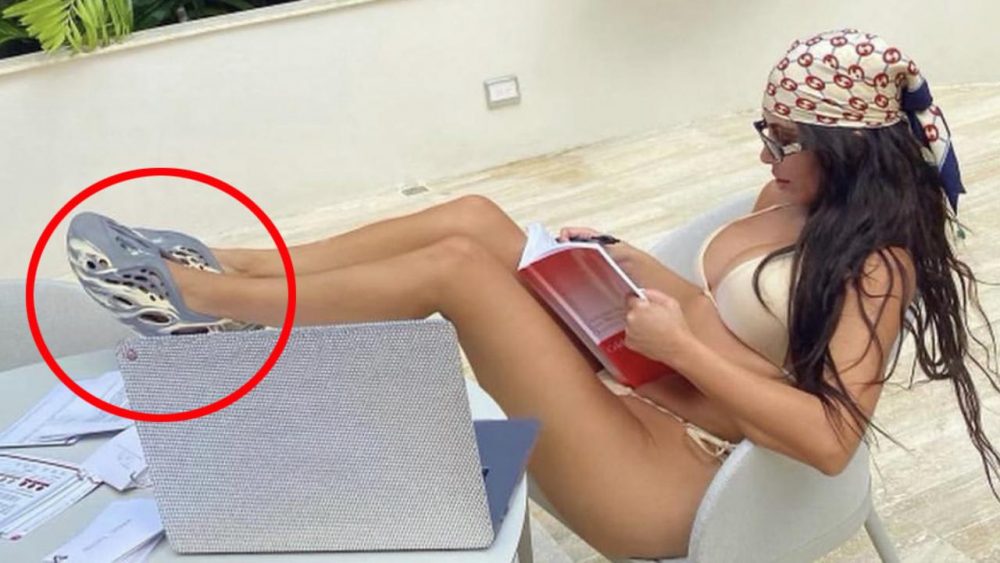 The billionaire student shared three photos of herself “studying” in a nude bikini, but fans have spotted something strange about the snaps.

The 40-year-old reality star is studying ahead of her first big exam, but she’s not doing it at the library or in her bedroom.

In a series of snaps shared on Friday, the businesswoman and mum-of-four showed herself “studying in the sun” — and it couldn’t be more extra.

Wearing a nude string bikini, a pair of Yeezy shoes, and a bandana, Kim can be seen sitting at a huge table surrounded by books and a laptop.

One photo shows her perched at the edge of her seat, adjusting her bikini bottoms as she reads from a massive book that one Twitter follower claims are a “California First Year Exam multiple choice questions book”.

The second photo shows her stood up, rifling through papers on her colossal table, while surrounded by palm trees – a glimpse of the ocean is visible through the leaves.

Her last photo shows her reading through a different book with her feet perched on the table, the grey and white Yeezy shoes – designed by her estranged husband Kanye West – on show.

Understandably, the far from ordinary study arrangement has got the internet talking, with some declaring it “impossible” to study in the sun while others suggested the photos were just posed.

Others joked this was also how they studied for their exams at college too.

While many praised the savvy businesswoman, who was recently made the Forbes World’s Billionaires List after the success of her most recent businesses, KKW Beauty and SKIMS, for being a “great role model”.

However, one detail in the photos stood out to fans – her choice of footwear. Kim reportedly filed for divorce from her rapper husband after six years of marriage in March – with some fans suggesting she doesn’t need to wear his “ugly” footwear brand anymore as a result.

“Kim, you don’t have to wear those yeezys anymore, girl; you’re single,” one wrote on Twitter.

“One thing bout Kim, she wearing them Yeezy divorced or not!” another said.

“Kim K wearing Yeezys while going through a divorce with Kanye is tickling me,” someone else stated.

“Someone, please tell Kim that she doesn’t have to wear. Kanye’s weird-ass shoes anymore,” one woman shared.

While one person said: “Kim wearing the Yeezy still says something. I’m not sure what, but something.”

The Keeping Up With The Kardashians star and Kanye have four children – North, 7, Saint, 5, Chicago, 3, and Psalm 1.

The superstar couple has “lived separate lives” in the months since the rapper’s public mental health breakdown, which involved a Twitter spree where he compared Kris Jenner to North Korean dictator Kim Jong-un.

Though they’ve appeared to be on bad terms recently, sources told TMZ recently things have been as “amicable as a divorce can be”.

The reality star is asking for joint legal and physical custody of the children.

Sources close to the family told the outlet Kanye is “fine” with the joint custody arrangement as the couple is “committed to co-parenting together”.