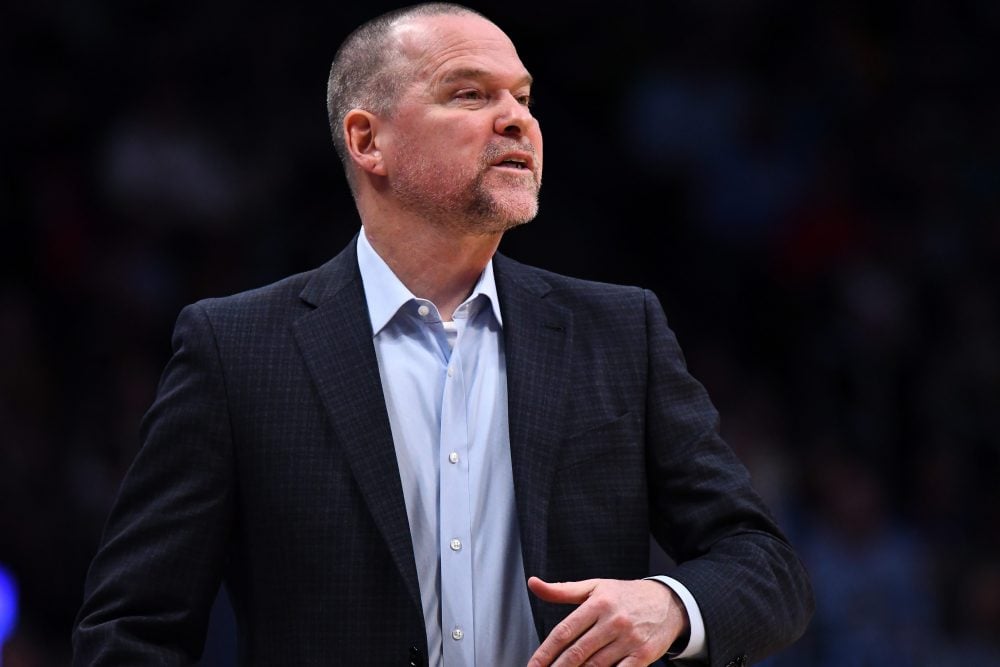 Denver Nuggets coach Mike Malone opened his pregame press conference on Tuesday to tribute the 10 people killed in a mass shooting in Boulder, Colorado, on Monday.

“We must turn our attention to where it should be, and that’s back in Boulder,” Malone said. “Yesterday was another tragedy. Hopefully, it’s something we can find a way to prevent from happening in the future. I think I speak for everyone on our team, our travel party that our thoughts and prayers are never. Still, our thoughts and prayers are definitely with the Boulder community and all the families of the 10 innocent people who were murdered yesterday.”

Golden State Warriors coach Steve Kerr offered similar condolences. He spoke in a pregame press conference on Tuesday in front of a backdrop that listed all names of the victims in both the shootings in Boulder and in Atlanta.

“The reason to do it is to remind people these are human beings,” Kerr said. “It’s important to humanize the victims and not just count them. Too often, you pick up a story, and you just read there were eight victims or 10 victims, whatever the number is. When you see faces, and when you see names, it personalizes it, you put it together, and you think about how many people are suffering – how many family members and friends and not to mention, of course, how many lives were cut short and how many dreams were shattered. If we don’t humanize it, it just continues to be a statistic, and it makes it much easier for the idiots out there to say, ‘This is the price of freedom in terms of owning guns.”‘

Kerr called that argument “possibly the dumbest expression I’ve ever heard in my life.”

“Can you imagine the price of freedom is a bunch of innocent people being mowed down by a weapon of war? But no, ‘That’s the price of freedom; that’s why we’re Americans.’ What are we even talking about?” Kerr said. “We have to protect each other. The best way to do that is to humanize the victims and get people to understand.”

Malone’s voice broke as he gave biographical details of Talley – “father of seven kids … so we keep them in our thoughts and prayers.”

Asked how the team processed what happened in Boulder, Malone said he couldn’t speak for the players but said, “I think we’re all tired of it. That’s an understatement. I know for me, you get so caught up in the job and basketball, and we get judged on wins and losses, but if you take a step back and you put yourself in one of those families, what do you feel? This is a game. It’s a game I love, I have a passion for, but I think about Eric Talley and his seven kids. That’s what I think about. I’m just heartbroken for them and everybody else, and hopefully, we as a country, as a state, can find a way to be better.

“I apologize for my emotions.”

He wiped away tears while he gave his answer.

While in the Orlando bubble, Malone was equally as heartfelt about social and racial injustices, calling for change. Kerr has been just as outspoken in recent years about gun violence in the United States.

“Ted Cruz, this could be your family. This could be your friend. This could be somebody very close to you. If this happened, would you not want something in place where there is a background check?” Kerr said, referring to the Texas Republican Senator. “It’s just mind-boggling to me that we can just continue to cater to the tiny minority in this country. Again, 90 percent of Americans, regardless of political affiliation, support background checks. We go through drivers’ school and drivers’ safety. We have to apply for a license to drive a car. Nothing like that with a gun? We can just show up at Walmart, buy an AR15, and murder 10 people, and that’s the price of freedom? Really, we’re going to keep saying that? So, a lot of us are just angry.”

Part of Kerr’s anger stems from his father, Malcolm, being assassinated as a diplomat in Lebanon in 1984 in what was considered an act of terrorism. As the Warriors’ head coach, Kerr has spoken out against gun violence and participated in protests with groups including the Brady Campaign, the Sandy Hook Promise, March for Our Lives, and the Giffords’ group.

“This issue is very near and dear to my heart because my family had to deal with the loss of my dad and my mom’s husband, and we’ve had to deal with the aftermath ever since,” Kerr said. “We don’t want other people to have to deal with what we’ve dealt with, and yet over 100 people a day in this country die from a gun, whether it’s an accident, homicide, or a suicide. So we have to address it. I think everyone is so fed up.”