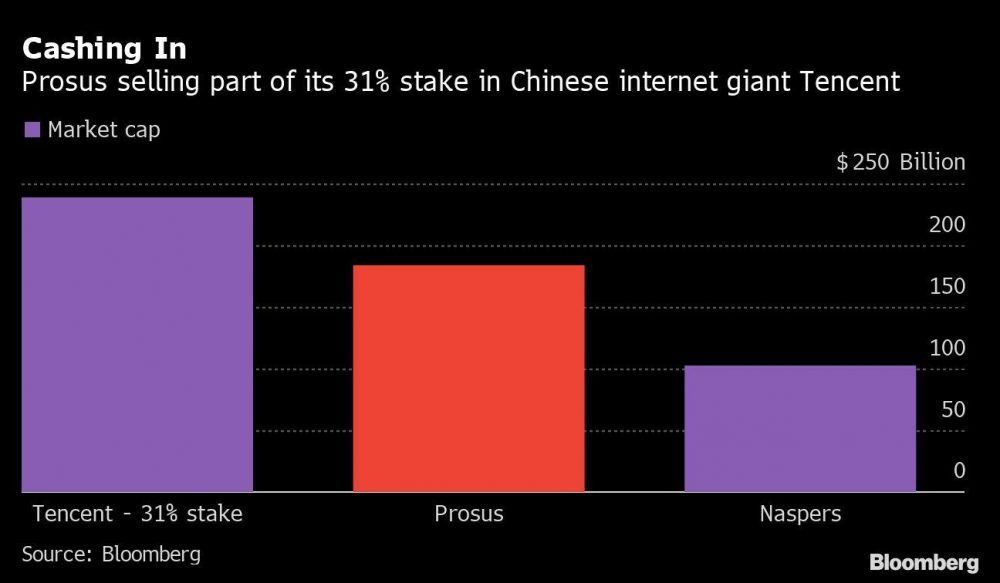 (Bloomberg) — Shares of Tencent Holdings Ltd. edged lower in Hong Kong after Prosus NV priced its placement of the Chinese internet giant’s stock at the top end of a marketed range, raising HK$114.2 billion ($14.7 billion) in the world’s second-biggest block trade on record.

Tencent fell as much as 2.5% in early trading before paring losses to trade 1.3% lower as of 10:20 a.m. in Hong Kong. According to the terms of the agreement obtained by Bloomberg News, Amsterdam-listed Prosus priced the deal at HK$595 per share, representing a 5.5% discount to Tencent’s last close of HK$629.50. The selldown is the second-biggest block trade-in data compiled by Bloomberg, smaller than the U.S. Treasury Department’s $20.7 billion sales of American International Group Inc. shares in 2012.

E-commerce group Prosus’ sale of a 2% stake in Tencent will reduce its holding to just under 29% while remaining the biggest shareholder of the Chinese firm, it said in a statement earlier Wednesday. It was marketing 191.89 million Tencent shares at HK$575 to HK$595 apiece.

“The sale could provide a perfect opportunity for long-term investors to buy Tencent,” said Louis Tse, Hong Kong-based managing director at VC Asset Management Ltd. “The anti-trust law in China, whether it would be very stringent, is a key to its future performance. But being able to price the shares at the high end reflects market confidence.”

The deal will more than quadruple Prosus’s cash reserves from $4.6 billion as of the end of September. It helps to boost Prosus’s coffers at a time when e-commerce is booming, with the coronavirus pandemic increasing online demand for everything from shopping and food delivery to education. Proses already has assets in those sectors alongside payment services and has long been on the hunt for further acquisitions.

“The group has some exciting investments in India’s e-commerce space, so perhaps that is where some of the capital will go,” said Nick Kunze, a senior portfolio manager at Sanlam Private Wealth. “They now have the war chest to implement on the opportunities.”

The fundraising may also give Prosus another shot at securing a mega-deal, having missed out on two high-profile takeovers over the last 18 months. The company lost an $8 billion battle to buy U.K. food group Just Eat Plc to Takeaway.com at the start of last year. In July, he was beaten in a $9 billion auction for EBay Inc.’s classifieds business by Norwegian rival Adevinta ASA.

Prose’s shares were down 4.6% at the close of Wednesday in Amsterdam. The company is cashing in on one of the all-time great venture-capital deals. Naspers Ltd., a Cape-Town-based parent, invested just $32 million in Tencent in 2001, an obscure internet firm. The shares are now worth about $239 billion.

Tencent Share Price to Face Pressure in Near Term: Smartkarma

While the decision has made Naspers the most valuable company in Africa, its market capitalization of about $105 billion lags well behind the value of Tencent holds. The creation of Proses was partly designed to narrow that discount, but the Amsterdam-based company is dwarfed by the size of the stake in the WeChat creator.

The company said that Proses has committed not to sell any further Tencent shares for at least the next three years. Naspers sold $9.8 billion worth of Tencent stake in 2018 before spinning off the shareholding and most of its other businesses into Proses.

“The market has already expected that every three years, Naspers would want to trim down its holdings to take out the heavy gains from Tencent to invest somewhere else,” said Tse of VC Asset. “So this placement itself is not very surprising.”

That perhaps explains the muted reaction in Tencent’s stock on Thursday. The 2018 stake sale by Naspers had contributed to a loss of more than 9% in Tencent’s shares over two days, wiping out $48 billion in market value.