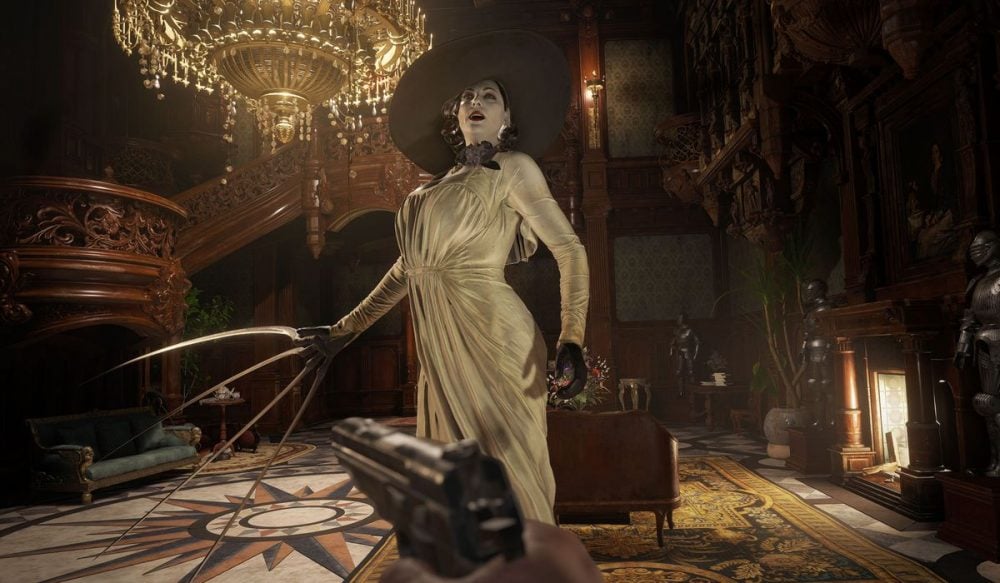 For the past quarter of a century, the premiere survival horror game returns with a sequel to its 2017 blockbuster in Resident Evil Village (Capcom, rated M for Mature, reviewed on PlayStation 4, $59.99).

The horrors encountered by Ethan Winters in rescuing wife Mia in the Louisiana swamps are three years past, and now the pair discreetly moved with their baby Rose to an undisclosed European city and are seemingly protected by the B.S.A.A. (Bioterrorism Security Assessment Alliance).

Ethan escapes but finds himself in Transylvania, Romania, setting up an experience for a solo gamer controlling the frantic father in a first-person perspective that one might find in any of the more significant themes parks during the Halloween season.

Specifically, parks set up scare zones, midway, and haunted houses for guests to roam through as ghouls and goblins chase and scare them.

In this case, Ethan has a central hub to hang out at called the Village, overrun with werewolves and monsters, and ultimately visits and must escape four prominent locations (haunted houses) and their grotesque lords — The Castle run by vampire Lady Dimitrescu; The House on the Hill run by the terrifying puppeteer Donna Beneviento; The Water Wheel run by merman Salvatore Moreau; and The Iron Tower controlled by the master of metal Karl Heisenberg (think Magneto).

Ethan also takes on the role of a fully armed Van Helsing-type character (reference Hugh Jackman’s performance in the 2004 movie). With help from a variety of weapons, upgrades, and crafting options, he becomes an action hero placed in a run-and-gun thriller.

His encounter with a variety of whacked-out classic monsters roaming around the Village and mansions does not disappoint.

They include the ferocious, slobbering lycans, the undead wielding swords hiding in a dimly lit areas, an army of Frankenstein monsters, and, by far the creepiest of the bunch, the blood thirsty dolls and a Thing-type monstrosity called Baby under the control of Beneviento.

Ethan also has help from a grotesquely obese Duke popping up with his collection of weapons and wares to be purchased.

Need some chem fluid (to craft a flask of health), a semi-automatic shotgun or a recipe for three-flavored mititei (collect the meats to prepare this permanent health upgrade)? He’s got it all for a price as well as plenty of critical information.

Now, my favorite moments of the Resident Evil experience always involve those haunted house jump scares seen in the early games as well as the first act of Resident Evil 7 in the Baker house.

A player gets some of that during his exploration of the Castle as he avoids the vampiric Lady Dimitrescu and battles her three bloodsucking daughters Bela, Cassandra and Daniela. The cool trio of siblings even materialize from swarms of insects.

He also gets a more macabre dose of horror jumps while in that cursed living doll mansion. Ripe with dark corridors and puzzles, it’s a dark ride peppered with escape rooms that will induce nightmares.

However, for the most part, we get more of a Resident Evil 4 bloodbath further familiar to gamers that enjoy the first-person shooter Call of Duty and its zombie combat mode.

Once one gets to the point of owning a sniper rifle to pick off humanoid gargoyles flying around buttresses, the “afraid to look around the corner” vibe is not so scary when compared to the pulse-pounding, shooter-survival action.

Still, a player will spend lots of time exploring, amassing collectibles to sell to the Duke; crafting and upgrading weapons; and, new to the game, being able to move items to block doorways and use game mechanics to temporarily fend off attacks using Ethan‘s perpetually mangled hands.

All a very familiar fit while the atmosphere remains as creepy and violent as ever in the game as blood splatters, heads explode from perfectly aimed gunshots, and horror music crescendos along with the occasional screams, shrieks, cackles and groans that all certainly set the Resident Evil tone.

Ultimately, the latest game (the eighth in the series) provides another roughly 10- to 15-hour-long interactive cinematic blockbuster that attempts to please all fans of the Resident Evil franchise and often succeeds.

Despite looking for more jump scares, Village is certainly the type of horror theme park that I was pleased to sink my teeth into.