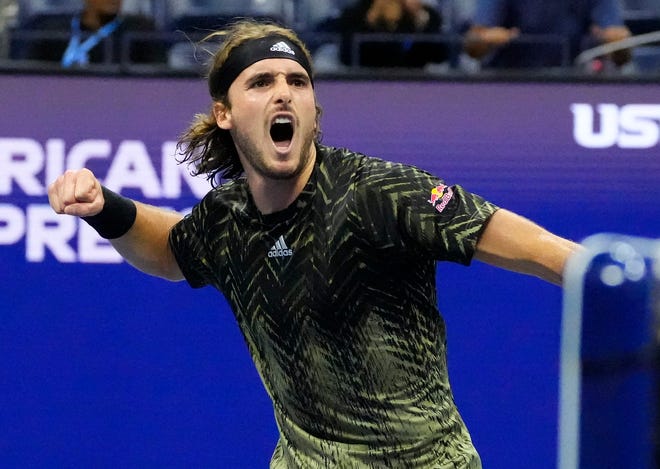 NEW YORK — After defeating No. 44 Adrian Mannarino on Wednesday night, No. 3 Stefanos Tsitsipas is now the winningest player on the ATP Tour in 2021, with 50 wins. He hit a career-high 27 aces and 53 winners, and all anyone wants to talk about are his bathroom breaks.

Tsitsipas took only 2 hours and 41 minutes to dismantle Mannarino, 6-3, 6-4, 6-7 (4), 6-0, which did not include the seven or eight-minute-long hiatus he took after losing the third set. Mannarino, who was visibly irked by what many players on tour see as a stall tactic — and a violation of tennis’ unwritten rules — asked for balls so he could practice serves while his opponent was off the court.

Tsitsipas returned from his break to boos from the crowd at Arthur Ashe Stadium.

“I haven’t done anything wrong, so I don’t understand,” Tsitsipas said in a post-match press conference. “The people love the sport. They come to watch tennis. I have nothing against them. I love the fans.

Tsitsipas has a history of taking long, mid-match breaks, but his actions have come to some sort of head at this U.S. Open. They reached a boiling point Monday when he played Andy Murray in the first round of the Open and departed the court for more than seven minutes. After the match, Murray said he’d lost all respect for Tsitsipas, and on Tuesday morning, said that it takes Tsitsipas “twice as long to go to the bathroom as it takes Jeff Bezos to fly into space.”

Tsitsipas taking a seven-to-eight minute-long break in his match against Mannarino on Wednesday did not de-escalate the situation. When asked what he thought of Tsitsipas’ decision to take a more extended vacation, Mannarino said he was more agitated by the rule itself rather than the player taking advantage of it. The 2021 Official Grand Slam Rule Book says that a player can leave the court “for a reasonable time for a toilet break, a change of attire break, or both, but for no other reason.” The rule does not state a limit for how long the break should be.

Most of the questions directed Tsitsipas’ way in his post-match press conference were bathroom-related, which seemed to frustrate the Greek player. At one point, a moderator needed to step in and advise journalists to not belabor the point.

“It is important,” Tsitsipas said of taking his break. “First of all, you carry less weight on you with all the sweat. You feel rejuvenated, you feel fresh, and you don’t have all the work bothering you and coming in your face, on your fingers, everywhere all over your body. It makes you feel better.

“For me, it is important to take that break. For someone else, probably not. And everyone has his own time. I try and be as quick as I can. Sometimes I just need a bit more time. That’s all.”

Tsitsipas fielded a question about the notion of breaking an unwritten rule and maintained that he had done nothing wrong.

“I’ve done everything the right way,” he said. “If I haven’t, I should be penalized. I completely agree with it. I should get a fine or be penalized if I haven’t followed whatever I’ve done correctly. But as far as I know, you know, it is a necessity, it is a need when I’m out there playing, performing.”

When pressed about Murray’s comments by reporter Ben Rothenberg, Tsitsipas insinuated that Murray had taken an extended bathroom break himself in the 2012 U.S. Open men’s final against Novak Djokovic.

“I have a question for you,” Tsitsipas said. “I don’t watch other people’s business. But I remember watching it when I was younger. Can you please check when Andy Murray faced Novak Djokovic at the final here, before the fifth set, that break? Can you please look it up and let me know next time?”

“I did,” Rothenberg replied. “He took less than three minutes.”

Tsitsipas is scheduled to play No. 55, Carlos Alcaraz, in the third round of the Open this week. More attention will likely be paid to his time spent off the court than on it.