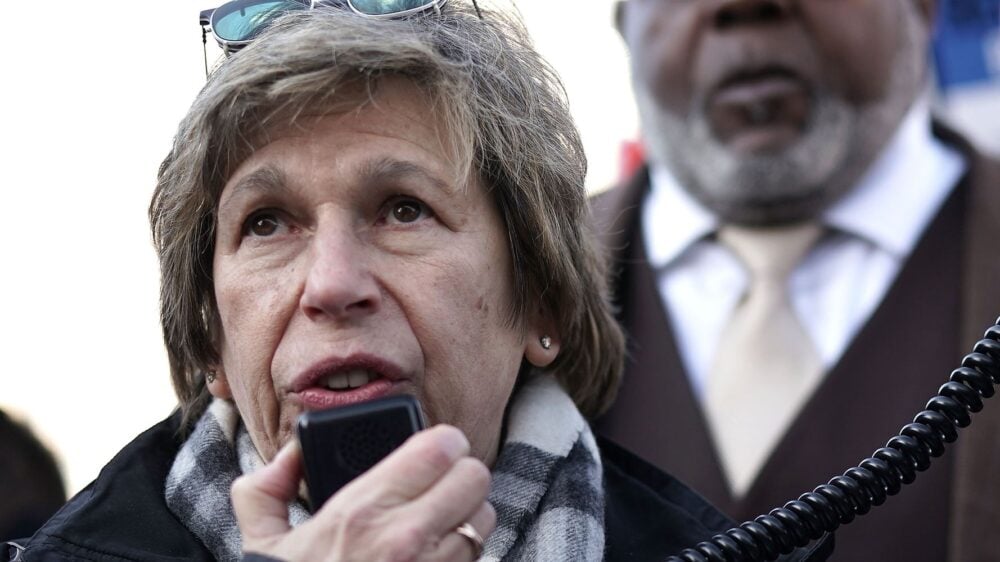 Randi Weingarten, president of the American Federation of Teachers, made headlines on Sunday when she came out to support vaccine mandates for educators after having previously opposed them.

Weingarten drew praise for reevaluating her stance since AFT is the second-largest teachers union in the country, with 1.7 million members, and has played a prominent role in shaping school policies amid the pandemic.

But the union itself has not changed its position on mandates ― only Weingarten personally. In a conversation with HuffPost on Monday, the labor leader clarified she was speaking as an individual, albeit an influential one.

Last fall, the union’s executive council issued a resolution stating that the COVID-19 vaccines were the best way to fight the coronavirus but that receiving the vaccine should not be mandatory for teachers. The council may issue a new resolution superseding that earlier one, but it has not yet done so.

Weingarten told HuffPost her union’s leaders are trying to manage the conflicting views within the group’s membership.

“You represent everybody within a union,” Weingarten said. “We’re a democracy, just like the United States. We’re a big tent, and we represent everyone, and we have to create a consensus within our membership, particularly when you’re talking about something that affects everybody. You have to go through that kind of process of really talking to people.”

Many other labor leaders are clearly facing the same internal dynamic as public and private employers move to implement vaccine mandates. Several states plan to require that public workers be vaccinated as a condition of employment, and employers like Tyson Foods plan to do the same. (In some cases, people who remain unvaccinated would have to undergo regular COVID-19 testing.)

A few labor groups have balked at these plans, including leading unions for firefighters and meatpacking workers and the other major teachers union, the National Education Association.

It created grave distrust to talk about mandates. That’s why we thought it was more efficacious to do this in a volitional way.
Randi Weingarten, president, American Federation of Teachers

Other labor leaders, however, have been more enthusiastic. Before he died of a heart attack last week, former AFL-CIO President Richard Trumka said he supported mandates because they would make all workers safer.

If the U.S. had a better vaccination rate, we might not be talking about mandates. Right now, around 71% of adults have received at least one dose of the COVID-19 vaccines authorized for emergency use, but in a dozen states, that rate is still below 60%. Caseloads and hospitalizations are rising across the country as the delta variant spreads, threatening the in-person school and the economy at large.

On the whole, teachers have been remarkably accepting of the vaccine compared to the general population, Weingarten noted. Nearly 90% of educators and school staff are vaccinated, according to the White House. Weingarten said this success story has been lost amid the anger aimed at teacher’s unions during the pandemic.

“A lot of this is misplaced. There is no other profession that has had such a high rate of vaccinations,” she said. “I’m sick and tired of teachers getting scapegoated.”

But even this demographic appears to include a contingent of hardcore vaccine skeptics. In a survey by EdWeek Research Center this summer, 11% of teachers said they do not intend to get vaccinated.

Weingarten acknowledged she’s worried about losing trust with those 10% or so of members who don’t want the vaccine.

“The misinformation that’s in the world has seeped into our union,” Weingarten said. “There are some people who are concerned about [the vaccine]. So it created grave distrust to talk about mandates. That’s why we thought it was more efficacious to do this in a volitional way.”

In some ways, the debate surrounding unions and vaccine mandates is a debate about a union’s purpose: How should it weigh the interests of a subset of dues-paying members against the interests of a community? When it comes to the vaccine, Weingarten said, catering to the 10% could jeopardize the union’s relationship to the other 90% ― and to students and their families.

“There are a lot of our members who are really angry at the people who are not vaccinated,” she said. “I’m concerned about rupturing trust with our parents. I worry about everything.”

There is a difference between a union opposing the concept of a vaccine mandate and a union demanding a seat at the table to negotiate what that mandate looks like. Depending on the laws covering them, unions often have a right to bargain over health and safety policies. Weingarten said that unions should have a voice in how mandates are crafted, and that she believes they could be negotiated quickly.

“This bargaining doesn’t take forever,” she said. “Sometimes when you have trust issues, it takes a while. You can do it in a matter of days.”

It’s not clear whether Weingarten’s union will adopt her stance in accepting mandates. The union’s executive council includes not just Weingarten and other top leadership but more than three dozen vice presidents from across the country. Each member would have a vote in approving a new resolution. Weingarten said they are having talks this week.

Regardless of what the council recommends as the union’s position, AFT’s local affiliates are free to take whatever stance they like in dealing with their employers. Weingarten pointed out that the local representing faculty at the University of Michigan supported a mandate there, while another affiliate, New York State United Teachers, has opposed one.

“We need to actually deal with what our employers’ vaccination policies are,” Weingarten said. “I want to try to get some consistency here.”