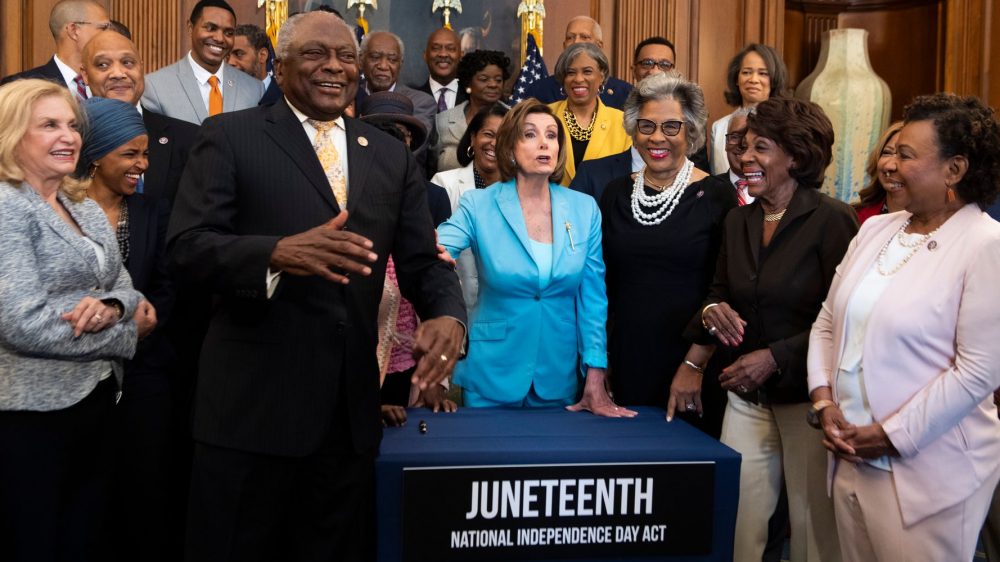 The Hypocrisy Of Honoring Juneteenth While Condemning Critical Race Theory

America has found itself at a contradictory point in history yet again.

On Tuesday, the Senate unanimously passed a bill to make Juneteenth, the day that marked the end of enslavement in the United States on June 19, 1865, a federal holiday. The House of Representatives overwhelmingly passed bills 415-14 the following day. On Thursday, President Joe Biden signed the bill into law.

However, there is debate among Black folks on social media, including activist Bree Newsome and author Fred T. Joseph, on who actually benefits from making Juneteenth a federal holiday. Some folks have made memes pointing to America’s capitalistic approach to holidays and noting how low-income Black workers may not get the day off.

Social media users have also pointed out the irony of lawmakers’ overwhelming support for making Juneteenth a federal holiday compared to their stalled approach to fighting current racial discrimination and injustice — including through the John Lewis Voting Rights Act, legislation that would restore and strengthen parts of the Voting Rights Act of 1965 that the Supreme Court struck down in 2013.

In a statement Thursday, Congressional Black Caucus Chair Joyce Beatty (D-Ohio) said making Juneteenth a federal holiday is “important and long overdue” but is not the end of the fight to rectify this country’s racist past.

“The Members of the Congressional Black Caucus have waged this fight for decades and, while we will celebrate this milestone, let us not forget how much further we must go,” she said. “Voting rights, the racial wealth gap, justice in policing, and so many more issues remain to be overcome – and, through Our Power, Our Message, the Congressional Black Caucus will continue to lead the fight on these issues. We look forward to joining President Biden this afternoon as he signs this bill into law.”

For many, making Juneteenth a federal holiday also flies in the face of recent statewide laws to ban the teaching of critical race theory in schools — an academic framework that critiques how institutionalized racism has impacted the most marginalized. This week, Texas Gov. Greg Abbott (R) signed a bill that will effectively stop teachers from talking about racism in classrooms.

The bans and limitations on how teachers talk to their students about the history of systemic racism will no doubt impose obstacles about how they teach about this country’s newest federal holiday.

It is somewhat contradictory in terms of folks coming out and saying, ‘we should recognize Juneteenth as a holiday,’ and yet we shouldn’t be allowed to teach some of the finer points of what Juneteenth really is.
Stefan Lallinger, adjunct lecturer for the School of Education at American University

Juneteenth marks the ostensible end of enslavement in the United States, two and a half years after signing the Emancipation Proclamation. On June 19, 1865, Maj. Gen. Gordon Granger arrived in Galveston, Texas, to tell enslaved Black people that slavery had been abolished. For many, Juneteenth has become known as the actual Independence Day for Black Americans.

Stefan Ballinger, who began his career in education teaching social studies but is now an adjunct lecturer for the School of Education at American University, said censoring how American history is taught in this way hurts students and disempowers educators.

“I do think it is somewhat contradictory in terms of folks coming out and saying, ‘we should recognize Juneteenth as a holiday,’ and yet we shouldn’t be allowed to teach some of the finer points of what Juneteenth really is,” he said.

“Juneteenth connotes the final, sort of real end to slavery if you will, [when] so many folks really teach the Emancipation Proclamation as the end of slavery in 1863.”

“I do think it’s somewhat hypocritical to not be able to engage those topics in the social studies classroom,” Lallinger said, “and then claim this mantle of racial reckoning with our past. Those two things are incompatible.”

In the 1970s, a group of scholars and legal practitioners began exploring the role the legal system plays in exclusionary and discriminatory practices, noting some of the stalled efforts from the civil rights movement. The framework builds upon work that Black scholars, including W.E.B. DuBois, started decades prior. In 1989, Derrick Bell, Alan Freeman, Kimberlé Crenshaw, and Richard Delgado hosted a Madison, Wisconsin, that began the critical race theory movement.

Crenshaw, who coined the term, told CNN earlier this year that critical race theory grapples with the belief that past laws don’t have a fundamental implication for the present and future.

“Critical race theory attends not only to law’s transformative role which is often celebrated but also to its role in establishing the very rights and privileges that legal reform was set to dismantle,” Crenshaw told the outlet. “Like American history itself, a proper understanding of the ground upon which we stand requires a balanced assessment, not a simplistic commitment to jingoistic accounts of our nation’s past and current dynamics.”

“Our systems are embedded with racism and legal protections and policies that uphold that racism structurally and systemically,” said Proctor, who is an ambassador for the Partnership for the Future of Learning. This nonprofit organization works to make public education equitable.

“If we take a look back at critical race theory, just from a legal standpoint and taking a look at the structural piece, I think that would actually help to demystify a lot of what people are feeling because people are reacting right now. From a very personal level.”Democrats attend a bill enrollment ceremony for the Juneteenth National Independence Day Act in the Capitol on June 17, 2021. In the front row, from the left, are Reps. Carolyn Maloney (D-N.Y.) and Ilhan Omar (D-Minn.), House Majority Whip Jim Clyburn (D-S.C.), Speaker of the House Nancy Pelosi (D-Calif.), and Reps. Joyce Beatty (D-Ohio), Maxine Waters (D-Calif.), and Barbara Lee (D-Calif.).

Critical race theory has been in the news more frequently in the past few years since the New York Times published Nikole Hannah-Jones’ 1619 Project, which leans on critical race theory to highlight the long-lasting consequences of enslavement in this country. The project has become a part of the curriculum in more than 4,500 classrooms across the country.

In 2020, former President Donald Trump rejected the notion that the 1619 Project should be taught in schools and called critical race theory “a Marxist doctrine holding that America is a wicked and racist nation.” He also banned federal agencies from conducting racial sensitivity training related to white privilege and critical race theory.

Republican lawmakers have rallied around bills that ban critical race theory from schools and regulate how teachers discuss American history in recent months. Currently, 21 states have introduced bills that restrict educators from teaching critical race theory or limit how racism and sexism are discussed in the classroom. Several states — including Idaho, Iowa, Florida, Oklahoma, Tennessee, and Texas — have signed these bills.

Lallinger said that this fight against teaching about racism in U.S. schools is nothing new. The same states passing these laws were already avoiding lessons about how race has always worked in this country.

“Many of these states are already devoid of a robust account of the legacy of slavery and racism in the American past and its impact on modern society,” he told HuffPost. “So, you literally have politicians who are stirring up a culture war and passing legislation in places where what should actually be happening is consideration of the existing state standards and how there’s not enough of an understanding of all of the important pieces of this nation’s history, not just the parts that make us feel good about being Americans.”

“We need to really confront the other parts of American history because that’s really the point of history and teaching history to kids and the next generation,” Lallinger added, “so that they understand it in a way that does not lead us down a path to repeat the mistakes of the past.”

Our systems are embedded with racism and legal protections and policies that uphold that racism structurally and systemically.
Keturah Proctor, educator and ambassador for the Partnership for the Future of Learning

While critical race theory has its opponents, groups are fighting to promote lessons about systemic racism and other systems of oppression. On Wednesday, the American Association of University Professors, the American Historical Association, the Association of American Colleges & Universities, and PEN America wrote a joint statement opposing the new laws. Last month, the New York State Board of Regents launched an initiative to advance diversity, equity, and inclusion in schools across the state.

Proctor, who’s been teaching for 21 years, said that though New York isn’t using the term critical race theory, the Board of Regents initiative supports an educational framework aligned with teaching students about race and identity. She said her approach to teaching about such a broad and nuanced subject ensures she’s listening to her students and letting them lead. Proctor noted that her students have expressed a desire to learn more about race, so she creates a space for them to do so.

“We need to create spaces where students can wonder, think, have agency in their learning, and then take action,” she said. “If you step back and listen to young people, they’re saying yes, we do want to know more. The adults, again, are always in the way of what kids are saying that they want. I think we need to move away from being the gatekeepers.”

She noted that students have more access to information now than ever before and use social media platforms to learn about race and social studies, especially on TikTok.

“They’re getting the knowledge and the information, despite all of the boundaries and legislation that we’re enacting, right? You can ban this in your schools — guess what? Kids go to lunch, and they’re on Tik Tok; they see it anyway,” she said.

“That’s where the knowledge is happening. If we already know that it’s happening anyway, for school districts, you should be doing your due diligence to make sure that students have a platform to explore those ideas and those concepts in a framework that makes sense, right?”