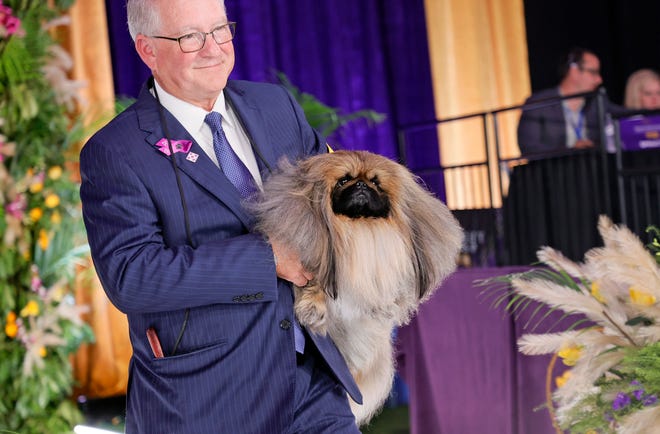 TARRYTOWN, N.Y. — Genes matter. Quite a bit. Such was the inescapable conclusion at the 145th Westminster Kennel Club Dog Show on Sunday night, when Wasabi, a 13 ½-pound Pekingese with a flowing lion’s mane of a coat and serious family history, boldly rose above six worthy competitors, even though he’s not even nine inches tall.

Wasabi is a three-year-old from East Berlin, Pa. He took home the most coveted prize in Dogdom, capturing Best in Show at the 145th edition of the nation’s most famous dog show – and one that was unlike any of its 144 predecessors.

Since 1877, Westminster – the second oldest continuously running sports event in the U.S. (the Kentucky Derby is first) – has been held in Madison Square Garden. To avoid possible pandemic protocol problems, show executives opted last fall to push it back from February until June, get out of midtown Manhattan and go 25 miles up the Hudson River to the idyllic grounds of Lyndhurst, a 19th-century Gothic mansion.

Lyndhurst was once owned by the Gould family.

The Goulds were dog lovers, and fancied the Pekingese.

The pandemic has wrought stress, complication and tragedy to every aspect of life, of course, the dog show world not exempt. In March 2020, Iris Love, one of the owners of Wasabi, died from COVID-19. David Fitzpatrick, another owner and the dog’s handler, thought fondly of her on the big night, as he stood inside a sprawling white tent that was festooned with purple and gold panels, and lights and bouquets to match.

It wasn’t the Garden, but Westminster-on-Hudson had come off beautifully.

“It’s a miracle they even had this show,” Fitzpatrick said. “Originally, I just thought it wasn’t going to be good, not having it in Madison Square Garden. (But) what can you say? It was an exquisite event.”

Toy group wins Best in Show for first time since 2013

Fitzpatrick also took Best in Show at the 2012 Westminster, with a Pekingese named Malachi. Malachi was Wasabi’s grandfather. Wasabi’s father, Pickwick, won best in Toy Group in 2017. Do you detect a pattern? Last year, Wasabi – whose mother was Sushi – was ranked the No. 1 show dog in the country.

“I just don’t always think lightning is going to strike twice, but it’s wonderful that it happened,” Fitzpatrick said.

The Best In Show winner is selected from seven competitors – each of whom first had to be Best in Breed, and then best in one of the seven groups that purebred dogs are divided into: Hound, Toy, Non-sporting, Sporting, Herding, Working and Terrier. By the time the two-day marathon was complete, Wasabi, named for the Japanese plant with a thick green root that tastes like horseradish on steroids, had outlasted some 2,500 rivals.

“What’s not to like about (this dog)?” said Patricia Trotter, an 85-year-old Westminster icon who was the sole judge for Best in Show. “He thinks he’s 10 feet tall. He stood there as though he was a lion – that’s part of the breed standard.

“People think a dog show is a beauty contest, and to some extent it is,” Trotter said. “But truly when you are judging purebred dogs you are judging not just their athletic ability, and their beauty, but how close they come to the breed standard.”

Although the show was closed to the ticket-buying public, several hundred spectators – family and friends of owners and handlers – made for a boisterous atmosphere, the excitement reaching its zenith a few minutes before 11 p.m. ET, when Wasabi officially became Top Dog, with the runner-up honor – Reserve Best in Show in Westminster parlance – going to Bourbon, a five-year-old whippet.

Talking to reporters with Wasabi at his feet and Wasabi’s hair brush in his coat pocket, Fitzpatrick said that the winner was “pretty nonchalant about the whole thing,” but still had plans for a major celebration. He figured Wasabi might have filet mignon, and he would go for champagne.

“This is what every dog person in America strives for,” Fitzpatrick said.