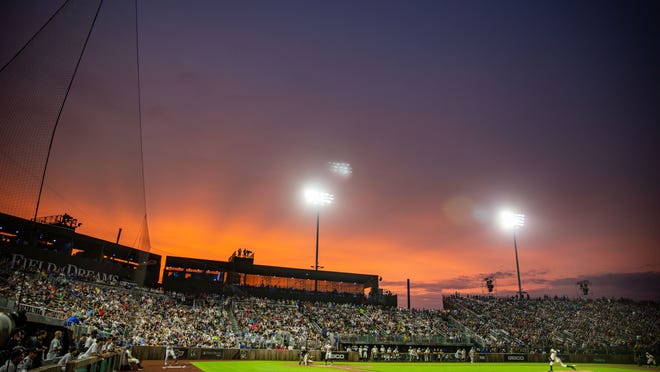 The pregame festivities at the specially constructed stadium near the Dyersville diamond from the 1989 movie “Field of Dreams” had plenty of Hollywood-like moments, with star actor Kevin Costner and players from both teams even emerging from the Iowa corn in the outfield before lineups were announced.

The game didn’t disappoint either.

The Yankees and White Sox spent the night dazzling the fans in the 8,000-seat stadium and the nationally televised Fox audience at home, launching ball after ball into the tall Iowa corn with eight total home runs. The final came on a walk-off two-run shot by Tim Anderson in the bottom of the ninth inning to give the White Sox a 9-8 win.

“The fans came to see a show, and we gave them a show,” Anderson said.

Thursday’s spectacle was the first regular-season MLB game in the state of Iowa. The whole idea of playing a game in Iowa was inspired by the 1989 movie “Field of Dreams” starring Costner. He plays an Iowa farmer who plows over his corn and builds a baseball field for the ghosts of banished “Shoeless” Joe Jackson and other disgraced 1919 White Sox members to play on.

That’s what landed the White Sox in the game that was first scheduled for 2020 but was pushed back a year due to the COVID-19 pandemic. It turned out to be worth the wait, with players and fans soaking up the sights and sounds of the site.

“That was as special and breathtaking a setting for a baseball game as I’ve ever been part of,” Yankees manager Aaron Boone said afterward.

Players from both teams walked through the corn and onto a pathway to the original diamond to visit the movie site. They spent their pregame time over there snapping photos and recording videos as they walked around.

The buildup was just as big, with Costner coming out of the cornfield and standing in the outfield as part of a touching tribute before the game started. Players from both teams came out of the corn as well and onto the field. Some veered off into center field where Costner was to shake his hand.

Costner wasn’t the only big name on hand. Some of MLB’s biggest former stars were also in Dyersville to work the game, including Alex Rodriguez, Frank Thomas and John Smoltz.

And from there, the home run derby was on.

But the Yankees stormed back. Aaron Judge, wearing special “Field of Dreams” cleats with the quote “If you build it, he will come,” might have had the most fun, hitting two home runs. The first came in the third when he ripped a three-run homer into the right field corn to give the Yankees a brief 3-1 lead.

Brett Gardner added a solo shot for the Yankees in the sixth to make it a 7-4 game. Judge’s second shot, a two-run homer in the ninth, made it a 7-6 game. After a Joey Gallo walk, Giancarlo Stanton smashed a two-run shot to give the Yankees the lead.

There was one more big shot to come, though. After Zavala drew a ninth-inning walk, Anderson crushed the game-winning homer.

“Being able to walk it off was definitely one of the best moments of my career, for sure,” Anderson said.